The Instrument Landing System, or ILS, helps with landing by guiding an aircraft onto a runway. Unlike VOR (VHF Omnidirectional Range), ILS offers both horizontal and vertical guidance.

ILS will only work when VOR (VHF Omnidirectional Range) is already engaged.

When in ILS range, several X symbols will be shown in a + formation. On both the horizontal and vertical axis, one X will be red, indicating the position of the optimal guideslope.

The goal is to keep both red Xs in the center, because that means the aircraft is right on the optimal glideslope. 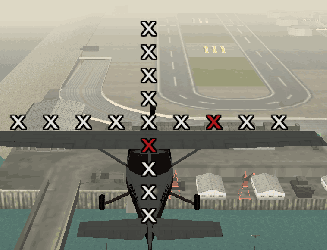 In the image above, the optimal glideslope is slightly below and to the right, so the plane is a bit too high and slightly off the centerline.

When the aircraft is out of the ILS range, a 'No signal' text will show.

Out of ILS range

When the aircraft is nicely in the middle, both horizontally and vertically, the ILS indicator will show the middle X in red.

The same applies for the vertical axis, a number will show at the top or bottom if the aircraft's height is very far from the ideal height.

When the aircraft is completely out of range of the ILS signal, either horizontally or vertically, the indicator will hide and a No ILS signal text will appear.

This article has been accessed 767 time(s).
Main page Article index